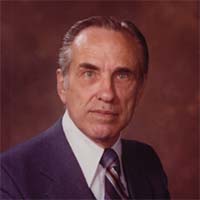 He graduated from the University of Chicago: B.S., 1947 (Phi Beta Kappa); M.S., 1949; and Ph. D,1951. He served as a Professor of Geology at the University of Tennessee (1951-57), Southern Illinois University (1957-67), and at Virginia Tech from 1967 until he retired in 1991. In 1972 he was appointed Alumni Distinguished Professor, the first at Virginia Tech to be so honored. From 1972 to 1975 he served as the Executive Editor of The American Mineralogist, the world’s foremost mineralogical publication and official journal of the Mineralogical Society of America. He also served the Society as Vice President (1976) and President (1977). In 1981-82 the University of New Mexico selected him to occupy the State of New Mexico’s first endowed chair, the Caswell Silver Distinguished Visiting Professor of Geology.

From 1988-1990 he served as Chairman of the Department of Geological Sciences at Virginia Tech. His textbooks on optical crystallography, crystallography and crystal chemistry, the first of which appeared in 1961, were used worldwide and have since been acknowledged as “classics.” The optical crystallography, translated into Spanish, was widely used in Spain and South America. The State Microscopical Societies of Illinois, Minnesota, and New York cited his contributions to optical microscopy. In 1988 the New York Society awarded him the Ernst Abbe Memorial Award, a silver medal that included Edwin Land as a previous recipient.

Chess, a lifelong hobby, led to five books. With his wife Louise he was co-author of Donnie (1950-1954) and of three beautiful daughters (in order of appearance): Terry Kensler, Janet Shuff, and Jill Bloss. As a long-time member of Northside Presbyterian Church, he served as a deacon, elder, and trustee.

In lieu of flowers donations may be made to Northside. Arrangements by McCoy Funeral Home, Blacksburg.