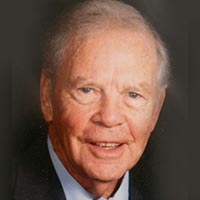 Richard Douglas Blevins of Pulaski, was accepted into the loving embrace of Christ on December 5, 2018. Richard was born on March 21, 1929 in Logan, West Virginia to Everett Blevins and Ova Curry Blevins. He will be remembered as a person who loved life, a family man, and an individual viewed by many to be humorous, fun-loving, intelligent, industrious, creative, kind, and generous.

Richard left Logan at age 17 for service in the Navy and returned several years later to his West Virginia roots. He married Ella Rose Garrett, the love of his life and his wife of nearly 70 years. Ella Rose was his anchor, creating the home and family life that fueled Richard’s career and numerous pursuits.

Richard, or simply “R.D.”, had a 41-year career with Appalachian Power in Logan, WV and in Pulaski, VA. He started as a meter reader and, through education and hard work, he became an electrical engineer. He held his colleagues in high regard and had great respect for the line crew that he supervised the latter part of his career with the power company. A lifelong student, he earned his engineering degree while working a full-time job with the power company. Richard was a respected leader in numerous organizations such as the Boy Scouts, Little League, amateur radio associations, square-dancing clubs, and his church.

Richard moved the family to Virginia, accepting a transfer with Appalachian Power. He found some ideal property to build a house that he designed, creating a home and yard which remains “a little piece of heaven”. Richard built a life with Ella Rose in Pulaski, creating a family homeplace for his 2 sons and daughters-in-law and his 5 grandchildren.

Richard was a wonderful father and grandfather, and a good neighbor. He was not one to sit idle, and would much rather be designing, building, creating, or trying something new. His interests were boundless. Some of Richard’s outdoor interests and projects were obvious, such as his big red barn, his horses, the vegetable garden and his radio tower, built for his ham radio pursuits. However, Richard also enjoyed working with wood and tried his hand at canvas painting, stained glass creations, playing a ukulele, singing songs, creating sound effects, wiggling his ears, and dancing a jig with the grandkids. In the last few years, he enjoyed listening to country music and saddle songs, regaling the life of his more vibrant youth. He never stopped whistling to the music on the radio and was often heard spontaneously whistling the songs of his youth. Richard’s larger-than-life presence will be missed by all of us. However, the memory of his words, deeds, wisdom, and commitment to family will continue to live through the lives that he has touched.

Richard is survived by his loving wife of 69 years, Ella Rose, his brother Alvin (Baxter) Blevins, and his sons and daughters-in-law: Doug Blevins and Susan, and Jack Blevins and Carolyn. Grandchildren include Valerie [recently deceased], Alaina, Drew and his wife Cara, Christina and her husband Zach, and Claire.

Family visitation will be 5-7 pm on Saturday, December 15 at Stevens Funeral Home in Pulaski. A celebration of Richard’s life will be at First United Methodist Church in Pulaski, Virginia, on Sunday December 16 at 2:30 pm, with a graveside burial at Oakwood Cemetery in Pulaski. Following the burial, friends and family are invited to gather at the church to share food and fellowship. In lieu of flowers, the family encourages donations to one’s own church or to the charity of one’s choice.