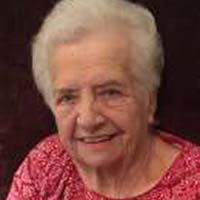 Ida Frances Meredith Blevins, 94, of Pembroke, departed this life Wednesday morning, November 14, 2018 in the care of Commonwealth Senior Living and Intrepid Hospice in Christiansburg, VA. Born in Pembroke, VA on April 7, 1924, she was a daughter of the late Ward and Gertrude Jones Meredith.

Funeral services will be conducted on Monday, November 19th at 12:00 noon with viewing at 11:00 AM in the Kendall Funeral Home Chapel, 605 Snidow St., Pembroke with Pastors Lane Spigener and Eddie Kendall. Burial will follow in Birchlawn Burial Park in Pearisburg, VA. Online condolences may be sent by visiting kendallfuneralhome.com