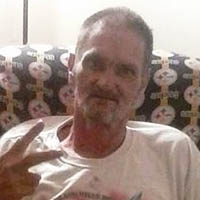 Tony “A-Man” Blankenship, 54 of Narrows, VA, passed away on October 2, 2020. Tony was born on March 2, 1966 in Portsmouth,VA and was the son of the late Wesley Blankenship and Sandra Jane Spicer Melanson.

Besides his parents, he was preceded in death by two brothers Randy Blankenship and Brian “Whitey” Blankenship; a special sister in law Stephanie Hudson Blankenship, Grandparents Claude and Hester Spicer, many aunts, uncles, and cousins.

Tony loved watching sports, but especially football and it was even better when his boys were playing. He loved hunting, Mark Martin, The Dallas Cowboys and playing bingo. Tony was one of a kind man who never made any excuses for who he was.

He is survived by two sons, Aaron Blankenship, fiancée Nina Crawford and Zachary Blankenship, a grandson Hudson Blankenship, two nephews Devin and Dustin Blankenship; a former Spouse Michelle Blankenship, Lifelong Best friend Amy Clehm; Aunt Rose Lauver, many cousins as well as second cousins, and numerous friends who were like family to Tony. He is home with his Momma, brothers and the rest of the family where we all know he has wanted to be.

A celebration of life will be held Saturday, October 10, 2020 in Peterstown,WV at the home of Dana Fitts for anyone wishing to attend. In lieu of flowers, contributions can be made at the event or to Givens-Riffe Funeral Services. The family is being served by Givens – Riffe Funeral Service in Narrows, (540) 726-2442, and online at riffefuneralservice.com.