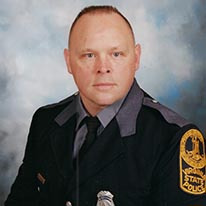 John “Greg” Gregory Blankenship, age 61 of Pulaski, died after a lengthy fight Friday, August 7, 2021. His fight on earth was getting boring so he thought to himself, “What would Chuck Norris do?” So, he decided to ask Jesus for an arm-wrestling match. And regardless of the results, he is a winner.

Greg was a fiercely faithful man that loved the Lord. He loved his family with a passion, and he prayed for them daily. He courageously served his country, first in the Navy and then 32 years in law enforcement, 28 of which was with the Virginia State Police. His last assignment was as Bureau of Criminal Investigation Division Six Commander (Captain). For many years, he served as the Coordinator of Defensive Tactics throughout the State of Virginia and was a Master Defensive Tactics Instructor with the Virginia Association of Law Enforcement Defensive Tactics Instructors (Valedti DT). He was a Shihan (Master Martial Arts Instructor) of Karate and Goshin-Do with Chikubu-Kai Karate-Do, and a longtime personal student of Soke W.H. Price.

He was honored by all of his titles, but his greatest role was being the foundation of his family. He was proud to serve as honorary wrestling coach at Jefferson Forest High School, especially when his son Jacob was wrestling.

Greg is preceded in death by his parents Bud and Irene. He is survived by his wife (Leigh) of 33 years, daughters (Jessi and Rachel) and their spouses (John and Matt), his son (Jacob), and five grandchildren (Karrin, Kayla, Kaylan, Trayden, and Thea). He is survived by the Blankenship clan: Linda, Kelly, Jeff, Judy, and Joe. He has numerous nieces, nephews and in-laws, all of which hold a special place in his heart.

Funeral services will be held Saturday, August 14, 2021 at 2:00 p.m. at the Pulaski Church of God (Bob White Blvd). Officiating will be Pastor Jim Linkous of Faith Bible Church in Pulaski, and Pastor Sam Stump of the Norwood Baptist Church in Goode, VA., where Greg served proudly as Deacon. The Virginia State Police Honor Guard will serve as pallbearers. The family will receive friends at the Pulaski Church of God on Saturday from Noon until 2:00 p.m.

In lieu of flowers, any contributions may be sent to City of Refuge, 249 Dora Highway, Pulaski, VA 24301. Online condolences may be sent to the family by visiting www.seaglefuneralhome.com. Arrangements by Seagle Funeral Home, Pulaski.

Per request of the family, all who attend the funeral service, wear a mask and exercise social distancing.