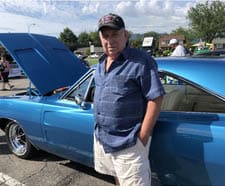 Jim served his Country as a Paratrooper and Sgt. in the U.S. Army. He was in the Davy Crockett Platoon from the 325th Airborne Infantry Battlegroup of the 82nd Abn Div. in Fort Bragg, NC. He received a Parachutist Badge.

He owned and operated Riner Small Engines after retiring from the United States Postal Service.
He loved the Virginia Tech Hokies, Washington Redskins, fishing and his days of drag racing at Elk Creek Raceway.