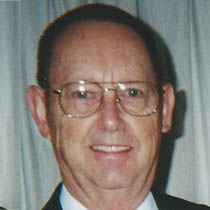 Elvis Andrew Blankenship, 84, of Blacksburg, passed away on October 10, 2014, at Montgomery Regional Hospital. Elvis was born in Lexington, Tenn., to John Homer and Estelle Grissom Blankenship on December 1,1929, and graduated from Lexington High School in 1948.

He served in the United States Army from 1949-1952, receiving two purple hearts for injuries received during the Korean War. After returning from Korea, Elvis married Sue Rogers on October 8, 1951, and the couple enjoyed a 63 year bond of love. He went on to earn an electronics certificate and worked as a Systems Engineer for IBM for 34 years, retiring in 1990. After retiring from IBM, Elvis returned to class to become certified in tax return preparation and enjoyed many years providing bookkeeping and tax returns services! He enjoyed gardening, reading and serving as a deacon and in other roles at church.