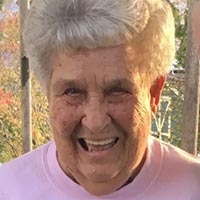 Dorothy Jean Wilkinson Blankenship, 82 of Narrows, VA went to be with the Lord on Wednesday, April 8, 2020 at her home surrounded by her family. Dorothy was born on April 16, 1937 in Narrows and was the daughter of the late Frank Willard Wilkinson and Helen Holmes Fillinger Wilkinson. Besides her parents, she was preceded in death by a daughter, Mitzi Elizabeth Blankenship.

Dorothy was a lifelong resident of Narrows and was a retired employee of the Celanese Corp. She enjoyed the company of her grandchildren, great grandchildren and all of her family. She was also an avid Nascar fan.

Due to Covid-19 regulations, a private graveside service will be held Friday, April 10, 2020 at 2pm with Pastor Tracy Allen officiating at the Fairview Cemetery in Narrows. The family is being served by Givens-Riffe Funeral Service in Narrows, (540) 726-2442, and online at riffefuneralservice.com.