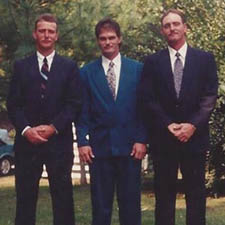 Brian Keith (Whitey) Blankenship, 51 of Narrows, VA, passed away on Wednesday, May 20, 2020. Whitey was born on October 19, 1967 in Portsmouth, VA and was a son of the late Wesley Hendricks Blankenship and Sandra Jane Spicer Melanson. Besides his parents, he was preceded in death by one brother Randy H. Blankenship.

Whitey was a lifelong resident of Narrows and was known for keen sense of humor and his amazing ability in tile setting. He loved his sons and family and was an avid UNC Tarheel fan.

A memorial service will be held at a later date. The family is being served by Givens-Riffe Funeral Service in Narrows, (540) 726-2442, and online at riffefuneralservice.com.