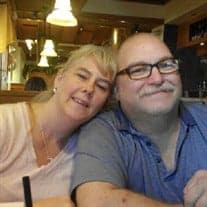 Charles Christopher Blanchard passed away on Wednesday, November 17th, 2021, at age 56, from complications of liver failure. He was surrounded by loved ones at the time of his departure.

Chris was born in Rose Hill, NC on November 4, 1965 to Charles and Jackie Blanchard. On September 6th, 1987 he married Sherrie Dee Peeler and together they raised three children: Justin, Karissa, and Brandon. He joined the United States Air Force and earned a degree in Computer Programming. After leaving the Air Force with honors he worked for the US Postal Service, then continued working in software development for two decades while dabbling in many different hobbies. Chris had a passion for learning new skills and was self-taught in many hobbies and trades including painting, playing guitar, gardening, locksmithing, woodworking, cooking, and hunting. He also loved movies, reading, and astronomy, with Star Wars novels as a favorite combination of them all. His greatest motivation was to take care of his family and ensure their futures were secure.

Chris was preceded in death by his father, Charles. He is survived by his wife Sherri, their three children and seven, soon to be eight, grandchildren as well as his mother Jackie and sister Anissa.

A memorial service will be held in Blacksburg, VA at McCoy Funeral Home on December 2nd at 4:00pm.

A service will also be held in Wilmington, NC at Pine Valley United Methodist Church with time and date to be determined.