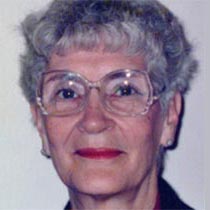 Sherry LaRue (Tibbets) Blackwell was born in Healdton, OK. She received a BA in music and a teaching certificate from Texas Tech where she met the love of her life, William A Blackwell. Both Bill and LaRue had humble beginnings. LaRue was the daughter of a West Texas/Oklahoma oil rig foreman and Bill was raised on a dairy farm in East Texas.

In the early years of marriage they decided to escape their simple roots, so LaRue supported Bill while he pursued his technical career. They moved to New York, Texas, Michigan, Illinois, and Oklahoma before settling down in their beloved Blacksburg.

LaRue was very talented, besides her exceptional piano playing ability, she could play tennis in the morning, host a party of 100+ EE faculty and their families, and then make a meatloaf for the United Methodist Church potluck. She was a dynamo and never missed a beat, volunteering for her children’s schools, Faculty Women’s Club, or lending support to a friend in need.

She was a master gardener, a card shark — always up for a game, a giving soul, and a true friend. She connected well with people; fun, empathetic and supportive. No matter the situation, she was always a lady; gentle, kind, and loving and will be missed terribly by all that knew her.

She is predeceased by her husband of over 60 years, Bill Blackwell, and her brother Bill Tibbets. She is survived by her two children David Blackwell and Becky Kates (Dick), her sister, Shirley Peloquin (Ernie), her grandchildren Scotty, Alan (Claye), and Kathy (Misty) Kates, her great granddaughter Lindsey Ratliff and many nieces, nephews, relatives, and friends.

Bill and LaRue were always together in life; they were the perfect team, and now together in death. They were buried together in a private ceremony on Wednesday, July 6, 2016.

In lieu of flowers memorial donations may be made to The Bill and LaRue Blackwell Graduate Research Paper Award, Fund Code 884023 Virginia Tech.

Checks may be made payable to the Virginia Tech Foundation, Inc. and mailed to
Office of Gift Accounting (0336)
University Gateway Center, Virginia Tech
902 Prices Fork Road
Blacksburg, VA 24061
Or donations may be made on-line by visiting http://www.givingto.vt.edu.