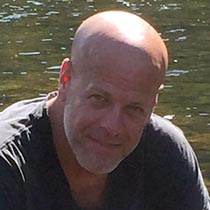 James G. Bittner II, 48, of Christiansburg, passed away Friday, December 9, 2016 following a year’s courageous battle with cancer. He was born September 10, 1968 in Canton, Ohio and was a 1986 graduate of McKinley High School.

Jim became a world traveler through employment opportunities that allowed him to visit and work in the countries of Australia, Samoa, Japan, China, Poland, Italy and Ireland. Jim’s passion was riding his beloved Ducati motorcycles. He was a member of iDesmo Owners Club in Indianapolis, Ind. and spent many hours on the roads with his fellow iDesmo members and friends. He never turned down a chance to learn or experience something new. Jim’s excitement for life and desire for adventure was contagious. He never met a stranger and never accepted there was anything he could not do in life.

He was preceded in death by his mother, Patricia E. Bittner; aunt, Barbara Wilson and cousin, Cheryl Burnell.He is survived by his father, James G. Bittner; sister, Tami (Bruce) Solinger; nephews, Brandon (Emily) Solinger and Brent Solinger; uncles, John (Betty) Niebel and Richard Wilson; aunts, Ruth (Gary) Merrell and Lenor Smith and many cousins. Jim will be greatly missed as well by his fiance, Misty N. Lester and her daughters, Annah and Abi all of Christiansburg.

The family extends special appreciation to the staff of Blue Ridge Cancer Center in Blacksburg, and of Lewis-Gale Hospital Montgomery County.

Funeral Services will be held Friday, December 16, 2016 at 11 a.m. at Canton Baptist Temple (515 Whipple Ave. NW, Canton, OH 44708). There will be calling hours on Thursday from 6 to 8 p.m. at Reed Funeral Home North Canton Chapel (801 Pittsburg Ave. NW, North Canton, OH 44720) and one hour prior to services on Friday from 10am to 11am at the church. Cremation will follow services and a private burial will be arranged for in the future.

In lieu of flowers, memorials may be made to American Cancer Society’s Relay for Life program c/o Abi Lester participant. Jim was so proud to support her Relay for Life team.

The family invites you to visit www.reedfuneralhome.com to view this obituary, get directions, sign the online guest book or share fond memories.