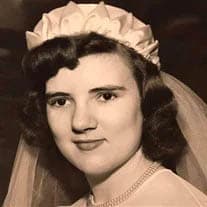 Norma Jean was one of seven children. She was born on March 28, 1931 in Montclair, NJ. She graduated from Montclair High School in 1949. Upon graduation, she got a job in New York City and took the ferry in daily. Norma Jean met Gerard Mancuso and they were married in 1952. She lived in Newark, NJ for awhile and then Upper Montclair, NJ. Norma Jean and Gerard had five children.

Norma Jean worked as an Avon Representative in Upper Montclair, NJ. Later, she worked at Community Hospital in Montclair, NJ. In 1986, she moved to Virginia and worked at Wolverine in Blacksburg. In 1996, she retired and moved back to NJ, where she volunteered at New Lisbon Developmental Center, New Lisbon, NJ and BCAP preschool in Browns Mills, NJ. Norma Jean was a member of St. Ann’s Catholic Church in Browns Mills, NJ and the Pemberton Township Senior Center in Browns Mills, NJ. In 2016, she returned to Virginia and lived out the remainder of her life.

Norma Jean was preceded in death by her son, Gerard Mancuso Jr. She is survived by her children: Sandra and Andrew Geary, Nancy Mancuso, Thomas Mancuso and Liliana Ramos, Sharon and John Lewis. Norma Jean is also survived by her grandchildren: Daniel and Eileen Geary, Justin, Kayla, Nathan and Samantha.