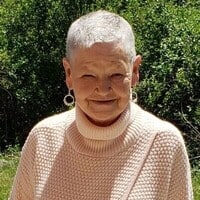 Duffie Jean Wilson Berard, 79, of Radford, passed away Friday, February 18, 2022. She was a former daycare teacher. She was preceded in death by her parents, Wildie and Vina Wilson; and husband, Robert Berard.

Survivors include her daughters and son-in-law, Tammie Atwell and Dale Summers, and Angie Atwell and significant other, D. R. Childers; son and daughter-in-law, Samuel and Anetta Atwell; 6 grandchildren; 7 great grandchildren; brothers and sisters-in-law, Elmer and Wanda Wilson, and Donald and Dottie Wilson; sister and brother-in-law, Jane and William Barton; and many other relatives and friends.

A memorial service will be held at 11 a.m. on Saturday, February 26, 2022 at the Mullins Funeral Home in Radford.

The Berard family is in the care of Mullins Funeral Home & Crematory in Radford. (www.mullinsfuneralhome.com)