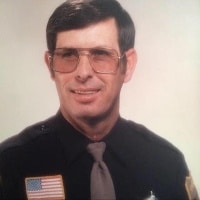 Thomas “Tom” Howard Bentley, Jr., age 74 of Pulaski passed away June 4, 2019 after a lengthy illness. Born October 18, 1944 in Pulaski he was the son of the late Thomas Howard Bentley, Sr. & Alberta Shouse Bentley. His sister, Clara Bentley Combs also preceded him in death.

Tom served Pulaski County with 20 years of service for the Pulaski County Sheriff Department and felt it an honor and privilege to serve his community.

Although his carving and woodworking skills were widely appreciated, they became very important to him during his illness.

The family wishes to thank Brittany Lawson his hospice nurse and asks that memorials in his honor be made to Good Samaritan Hospice, (1160 Moose Drive, Christiansburg, VA 24073).

At Tom’s request, there will be no formal services.