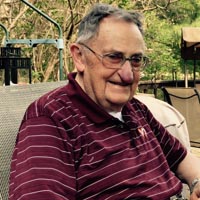 James (Jim) Bailey Bell passed away on July 23 in St. Paul, Minnesota due to complications from pneumonia. He was 87 years old and resided in Arden Hills, Minnesota since the death of his wife, Anne, in 2013. He is survived by his son, Jay and his wife Joanne and grandsons Zachary and his wife Anne Bell, David and his wife Liz Bell and his great granddaughter, Mara Jean, who has been the light of his life for the past 18 months.

Jim was born on May 21, 1932 in Marionville on the Eastern Shore of Virginia. His father, Roger, and mother, Macon, operated a vegetable farm where Jim was raised. He attended Virginia Tech earning a degree in Agricultural Economics in 1953. Upon graduation, he entered the US Army and served 18 months in Korea as a Signal Corps Officer. After returning from Korea, Jim entered graduate school at Virginia Tech and married Anne Bell, his beloved wife of 56 years. Their only son, Jay, was born in 1958 in Blacksburg. Jim was active in the National Guard and was activated in 1961 in response to the “Berlin Wall Crisis”. He spent one year on active duty at Fort Bragg, NC as Company Commander of the 684th Signal Support Company. He ended his military career in 1962.

Jim earned his Ph.D. at the University of Florida in 1964 and returned to Virginia Tech to assume a position as a Professor of Agricultural Economics specializing in marketing until his retirement in 1990. He had a very distinguished career at Virginia Tech where he served as a professor, extension project leader and department head. His work extended well beyond Virginia, including distant places such as the Philippines and Kenya. His academic awards were many and included multiple outstanding service and leadership awards, membership in several academic honorary societies and induction into the North American Farmers Direct Marketing Asso. Hall of Fame. He was named as Outstanding Alumnus for the Virginia Tech College of Agriculture and Life Sciences in 2008.

Jim was an avid Tech Hokie sports fan and seldom missed football or basketball games. He received much pleasure, and some grief, rooting for the Hokies over the years. He was also passionate about fishing in the Chesapeake Bay near where he was born and had many exciting adventures with his father, friends, son, and grandsons throughout his life and especially in retirement – fish in the Chesapeake Bay can rest a little easier now. Fish were always best fried, oysters roasted and clams made his mouth water – he was a true seafood connoisseur.

He moved to Minnesota in 2013 and enjoyed the opportunity to spend time with his family, make new friends, tell tales, attend family gatherings and offer words of wisdom to the younger generations. Jim continued to return to the Eastern Shore of Virginia each summer until a couple of years ago. His friends and family all described him as intelligent, resourceful, loving, generous and fun. Jim will be sorely missed.

A celebration of his life will be held at McCoy Funeral Home in Blacksburg at 10:00 AM on Saturday, August 3. The family asks that in lieu of flowers a donation can be made to the Chesapeake Bay Foundation.