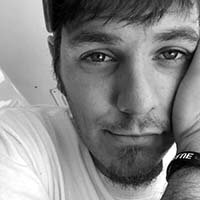 Joshua Ted Belcher, better known as “Josh” to his friends and family, left this world unexpectedly on Sunday, March 14, 2021. Josh was so many things in this life. He was a son to Tina and James, a brother to Cameron and Holly, and an Uncle to Waylon.

Josh had such a vibrant personality and wisdom beyond his years. Josh cultivated a self-taught gift for playing the guitar. He spent many hours playing for just himself. It was common for him to be sitting somewhere with a guitar and working on melodies he had written. He enjoyed playing music with and for his friends and was rarely seen without a guitar.

Josh also loved thought provoking quotes, stories, and poetry. He enjoyed having in-depth, intellectual discussions about topics that were important to him and the person he was talking to. If you ever had the pleasure of sitting and talking with Josh, or listening to him play the guitar, then you probably have memories of him making you smile.

Josh also loved to write. He started putting thoughts to paper in his early teens. Josh had a way of expressing himself that many writers long for. His ideas and thoughts were so deep and thought provoking they could elicit feelings from deep within you. Were you ever given the opportunity to read something he wrote, you would have been touched beyond words. If you were given a personal letter or note from him, re-read it and remember him fondly, you were given a gift, a very personal part of him.

When asking his friends how they would describe him they would say things like, he never met a stranger. Josh accepted people for who they were, there was never a dull moment when he was around, and he always made you laugh. It is best written by one friend who stated, “Not sure how to live a life you are not part of.”

Josh held many roles in his life, he was a son, a brother, an uncle, a grandchild, a nephew, a friend. He was a lover of music, literature, and animals. He enjoyed taking walks in the woods and sitting around a fire with family and friends.

Josh was a gentle soul. He is loved deeply and will be missed.

Funeral services will be held at 1:00PM on Saturday, March 20, 2021, at the Broyles-Shrewsbury Funeral Home Chapel in Peterstown, WV, with Pete Dunford and Dewayne Houk officiating. A visitation will be held from 12:00PM until time of services on Saturday at the funeral home.

Due to COVID-19, those attending the visitation and funeral services are strongly encouraged to wear a mask and practice social distancing. Online guestbook can be signed or condolences may be sent to the family at www.broyles-shrewsbury.com. Arrangements by Broyles-Shrewsbury Funeral Home, Peterstown, WV.