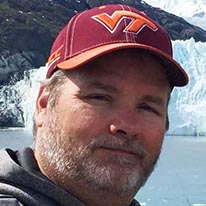 Mark Anthony Beckner passed away suddenly at his home on Friday, June 18th, 2021. Mark was born in Roanoke, Virginia on June 26, 1963, to Allen (Joe) Beckner and Mary Radford Beckner.

He grew up with his brother and sisters on Bent Mountain in Roanoke County. Mark attended Arnold R. Burton Vocational School where he studied autobody and graduated from Cave Spring High School in 1981. He was also a former volunteer firefighter for Station 8 in Bent Mountain, Virginia. Mark worked for Akzo Nobel (previously Reliance Universal) for 35 years. He most recently worked in the position of the Hazardous Min. Waste Manager.

Mark loved sports and children. For 14 years, he combined the two by coaching in Floyd County not only the teams his children were on but other children’s teams as well. Mark was a much loved and dedicated coach and most recently he coached his own grandson in T-ball in Roanoke County. He was elected the official Paw Paw for the team.

Mark met the love of his life, Jodi, on a blind date in 1982. Mark and Jodi were married in July of 1984. They settled in Bent Mountain, Virginia, and later moved to build their family home in Floyd County, Virginia where they raised their 3 children.

On Friday, June 25, the family will receive friends at Gardner Funeral home in Floyd, Virginia from 10 am to 12 noon. Funeral services will be at 12 noon at Gardner Funeral Home with Pastor Gregory Cox officiating. Interment will follow at Vest Cemetery, 432 Cypress Drive, Floyd Virginia.