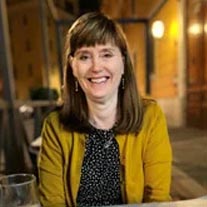 Gertrude “Trudy” R. Harrington Becker, 61, of Blacksburg, VA, passed away peacefully on August 26, 2022 of complications from lung cancer. She is preceded in death by her parents, John T. Harrington, M.D., and Gertrude Rose Harrington.

Born in Fall River, MA in 1961 and raised in Boston, Trudy was the oldest of seven children. She attended the historic Boston Latin School (Class of 1979) and graduated from the College of the Holy Cross (Class of 1983). Trudy then moved to Chapel Hill, NC, where she earned an M.A. in Classics from UNC Chapel Hill and met Andrew Becker. The two married in the summer of 1987 and moved to Blacksburg, VA, where Trudy earned another M.A., this one in History, from Virginia Tech, and the pair had their three children. Trudy and Andy both joined the Classics program at Virginia Tech and settled in Blacksburg permanently.

A deep commitment to education was a throughline of Trudy’s life. She returned to her own education, even after multiple graduate degrees, to earn a Ph.D. in Classics from the University of Florida in 2008 with a dissertation on fragmentary Roman historians. But her scholastic commitment wasn’t centered on herself alone. She was dedicated to the education of her three children, and her passion for educational stewardship was displayed over and over in her relationships with her VT students. For them, Trudy was often more than a teacher: she was an advocate, champion, and true mentor. She took her students on, especially first-generation college students or those struggling in their academic and personal lives, and made it her mission to guide them with a stern but supportive hand. Her students felt Trudy’s impact long after graduating. Trudy’s excellent work in teaching and advising also led to major awards, including Virginia Tech’s Wine Award for Excellence in Teaching, Alumni Award for Excellence in Undergraduate Academic Advising, and Alumni Award for Excellence in International Education.

Any of Trudy’s relatives can attest that her love for her family was fierce and relentless. As the oldest of seven, she developed a skill for taking care of others from her earliest years and she was intensely protective of anyone she took under her wing. Trudy’s tenacious love drove her marriage of 35 years with Andy—he was always her favorite person and best teammate, both at home and in teaching together. She’d say that being with Andy allowed her to be who she wanted to be. And no issue faced by Trudy’s three kids was too big or too small for her to take on, to tackle, to try to fix. She was their rock and their inspiration, and her love enabled all three children to flourish.

Trudy’s home base was Blacksburg, but over the course of her life she traveled extensively, including visiting more than 20 countries. She’d joke that she wasn’t interested in seeing anywhere the Romans didn’t go—but still loved visiting places like Myanmar or South Korea. She returned again and again to the Hummocks in Rhode Island where the Harrington family swam, sailed, tossed rocks, ate chowder, and spent hours talking on the porch every summer of Trudy’s life. Across all her travels, her most beloved place was always Rome—the site of her scholastic research and countless meaningful moments with her students, adult tour groups, and her beloved family. A slice of potato pizza, an Aperol spritz, or a short walk to the Colosseum could always bring her a smile.

Trudy loved reading—a trait passed down from her parents. She usually had a mystery novel on hand, and if anyone sent her an article on a topic they loved, there was a good chance she’d have already read it. As an avid sports fan, she rooted fiercely for her teams, from the Hokies and Tar Heels to the Patriots and Red Sox. She was also a dedicated supporter of her kids’ favorite teams; visitors to the house on a Saturday morning could invariably find English Premier League games on the TV as Trudy watched intently and utilized every superstition to bring luck to Arsenal and Liverpool. In all these ways she spent her time, Trudy’s curiosity, ferocity, tenacity, and humor found ways to burst through.

In lieu of flowers, memorial contributions may be made to a scholarship fund for Classical Studies and Study Abroad through VT’s History Department here. (please select “History Department Annual Fund” and mention Trudy in the “in honor/in memory” section).