“If a man does not keep pace with his companions, perhaps it is because he hears a different drummer. Let him step to the music he hears, however measured or far away.” Henry David Thoreau 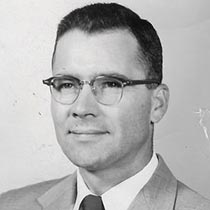 Winston graduated from East Corinth Academy in Corinth, Maine, and later joined the United States Army where he proudly served his country in the 505th and 508th Parachute Infantry Regiment during World War II.Winston earned his Bachelor of Science and Master of Science degrees from the University of Maine. During this time he met the love of his life, Priscilla Powers, of New London, Conn. and Deer Isle, Maine. He later earned his PhD from Auburn University and settled in Blacksburg, where he raised his family and retired from Virginia Tech as an Assistant Professor.

Winston was a dedicated member of the American Legion, tirelessly serving in various capacities within the organization. He enjoyed visiting family in Maine, fishing, poker games with friends, and spending time in his garden and workshop.

Winston’s greatest pleasures in life came from spending time with his family. He was a kind and generous man with a wonderful sense of humor. He was loved and respected by all who knew him and he will be greatly missed.

Rather than a viewing and formal memorial service, it was Winston’s desire that his life be celebrated with a private committal service, where loving memories and mutual support will be shared.