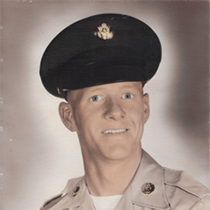 Thomas Edward Bean, age 70, of Christiansburg died, Monday, July 4, 2016, at New River Valley Medical Center. He was born in Montgomery County on February 28, 1946 to the late Samuel Edgar and Mabel Terry Bean. He was also preceded in death by his brothers, Johnny, James and Jackie Bean.

He was veteran of Vietnam having served in the United States Army. He worked many years at Electrical Supply and The Farmhouse in Christiansburg.

He is survived by his devoted companion and caretaker of over 20 years, Nita P. Graham, and her children, Darren and Charity Graham, Leah Musick, and their children who fondly referred to Tommy as Poppa Bean, Baron, Grayson and Colby. sister, Laura Virginia Sowers, several nieces and nephews, his coffee buddies, his Moose Lodge Family, and his many friends.

Funeral services will be conducted Thursday, July 7, 2016 at 7:00 pm in the McCoy Funeral Home Chapel with the Pastor Zane Cox officiating. Graveside service will be held Friday, July 8, 2016 at 10:00 am in the Swain Family Cemetery, Christiansburg. The family will receive friends from 5-7:00 pm Thursday evening at the McCoy Funeral Home 150 Country Club Dr. SW, Blacksburg