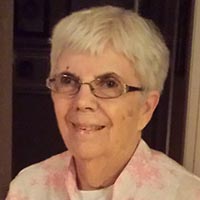 Patricia Ann Norton Bayless, 77 of Pearisburg, VA went to be with the Lord on December 6, 2018 in Roanoke. Mrs. Bayless was born on February 9, 1941 in Kentucky and was the daughter of the late Seba Roosevelt Norton and Pauline Huffaker Norton. Besides her parents, she was preceded in death by her husband, Roy C. Bayless, one son Brad O. Bayless.

Mrs. Bayless graduated from Carson-Newman University in Jefferson City, TN, and she taught geometry at the Giles High School in Pearisburg for 32 years. She was a member of the Riverview Baptist Church in Ripplemead and she loved the company of her friends, family and especially her grandchildren.

She is survived by, two daughters, Lesa B. Mabe and husband Les of Buchanan, Amy B. Harris and husband Andrew of Troutville, nine grandchildren, Braylin Fluckiger, Aftyn Carey, Culley Bayless, Addalie Bayless, Delaney Bayless, Wyatt Mabe, Sofie Bayless, Audrey Harris, Forden Bayless and two great grandchildren, Vivian and Scarlett Fluckiger and many treasured friends. She was known by her grandchildren as “Mom Mom Pat”. She was dearly loved by family and all who knew her and will be greatly missed.

Funeral services will be conducted, Monday, December 10, 2018 at the Givens Funeral Chapel in Pearisburg at 2pm with Pastor Shahn Wilburn officiating with burial following in the Birchlawn Burial Park in Pearisburg. The family will receive friends at the funeral home one hour before the service from 1 – 2pm.

The family would like to thank the staff at Friendship Health and Rehab for their caring service. Memorial donations can be made to the Juvenile Diabetes Foundation.