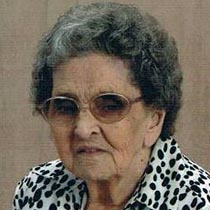 Mary Ratcliffe Bartley, 87 of Newport News, VA went to be with the Lord on Sunday, August 21, 2016 at the home of her daughters Donna Dumas and Pam Kincaid in Newport News, Va. Mrs. Bartley was born on October 23, 1928 in Pearisburg and was a daughter of the late Lacy Len and Hazel Davis Ratcliffe.

Besides her parents, she was preceded in death by one son, Charles Lee Lawson, one granddaughter, Samantha Bartley, five brothers, Jack, Vivian, Harvey, Lacy and Jerry Ratcliffe and six sisters, Dorothy Slusher, Polly Clyburn, Fannie Meredith, Martha Dunn, Lena Fay Ratcliffe and Patty Ratcliffe. Mrs. Bartley was a member of Church of God of Prophesy in Pearisburg, and she retired from Macy Elementary School cafeteria after 20 years.

The family will receive friends at the Eads residence at 115 Easley Street, Pearisburg. Funeral services will be conducted Wednesday, August 24, 2016 at 11am at the Givens Funeral Home in Pearisburg, VA with the Rev. Bill Brown officiating with burial following in the Ratcliffe Family Cemetery in Pearisburg.

The family will receive friends at the Givens Funeral Home Tuesday evening from 6 – 8 pm . Special thanks to “Miss T” her caregiver in Newport News who took extra special care of her. Online condolences can be sent to the family at givensfuneralhome.com.