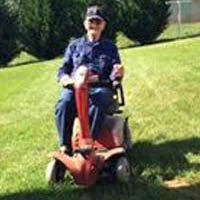 He lived in the Dixie Caverns area of Roanoke County for most of his life. He was a retired business owner. He owned Barnett Upholstery and Furniture and later Shawsville Power Equipment. Kenneth was an avid fisherman and gardener. He was a winner in the 1999 National Senior Games Association Shuffleboard Championship.

He served with the United States Army at the time of the Korean Conflict.

Services will be held at 11:00 a.m. on Wednesday July 22, 2015 at Horne Funeral Home Christiansburg VA. Burial will be at White Cemetery, Shawsville VA. The family will begin receiving friends and visitors at the funeral home starting at 10:00 am that day.

Memorial contributions can be made to the Elliston Volunteer Fire Department/Pug Wells Memorial Fund, Elliston VA.

The family would like to thank the staff of Virginia Veterans Care Center for their care and support of our dad for the last months of his life.