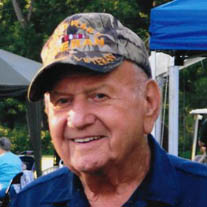 Calvin Coolidge Barnett, 90, of Blacksburg, died Tuesday, January 26, 2016 at New River Valley Medical Center. He was born in Blacksburg, Va. on January 17, 1926 to the late Luther and Lucy Frazier Barnett. He was preceded in death by his wife, Margaret Salmon Barnett, and all of his brothers and sisters.

He was a veteran of the United States Army having served in World War II, where he received a purple heart. For over sixty years Calvin owned and operated Barnett’s T.V. Shop in Blacksburg. He was a faithful member of the Pulaski Seventh Day Adventist Church as well and the American Legion.

The family will receive friends from 1 to 2 p.m. Friday at the McCoy Funeral Home, 150 Country Club Dr., SW, Blacksburg.