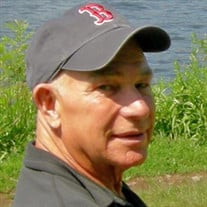 Dr. Michael A. Barnes of Blacksburg, Virginia, longtime professor and dairy cattle judging team coach in the Department of Dairy Science Department at Virginia Tech, passed away Sunday, October 10th at the age of 79. He is survived by his wife Katharine Knowlton, his brother Peter (Linda), his son Mike (Dianna), and his grand-children Michael and Madison. He was pre-deceased by his parents, first wife Carole, his younger brother Douglas, and his son Doug.

One of Virginia Tech’s most effective and well-respected professors, advisors and coaches, Dr. Barnes taught classes in dairy cattle selection, reproductive and lactation physiology, and reproductive management. His ability to teach both the “practical” and the “theory” earned him numerous teaching awards. In 2016, after 35 years of distinguished service, Dr. Barnes was named Professor Emeritus.

Dr. Barnes’ impact on the dairy industry, especially in the fields of lactation and reproductive physiology, was immense but he didn’t grow up on a farm. Instead, his interest in dairy cattle was sparked as a teenager when he went to work on a nearby dairy farm. The farm wife was a great cook, and her cooking may be as responsible as anything for his career in the industry. Mike later enrolled in the two-year agriculture program at the University of Connecticut and was nearly kicked out after setting his dorm room on fire (accidentally). Despite this, he ultimately graduated with a degree in dairy science in 1965. Barnes then enlisted in the Marine Corps and served his country in Vietnam. Upon returning home, he started a family and completed his Master’s/Ph.D. degrees in reproductive physiology at UConn. Moving his family to Lakeville, CT, he helped run dairy farm with a friend for a couple of years. In 1978, Dr. Barnes was recruited by Clemson University as an Assistant Professor for their Dairy Science Department and then, in 1981, moved to Virginia Tech.

During his career at Virginia Tech, Dr. Barnes taught, advised or coached more than 2,000 students. His unparalleled commitment to excellence, unrelenting honesty, candor, humility and great sense of humor made him popular among them. In four decades of dairy cattle judging team coaching, Dr. Barnes coached teams at UConn, Clemson and Virginia Tech where he instilled in his teams not only the ability to evaluate animals, but also to develop strong decision-making and communication skills.
Mike loved his sons, his dog(s), and students who worked hard and showed up early. He rooted for the Boston Red Sox, for UConn basketball, and for any team, really, whose coach was strong, student-oriented, and inclusive. Mike also loved good food, exercising, sailing and flying.

Above all else, Mike made you feel good when you were with him. He was tough, self-disciplined, and up-by-the-bootstraps, but also encouraging. At every turn Mike told us to “Do good”. We will because he showed us what that meant. Mike Barnes will be sorely missed by those who had the privilege to know him.

Donations in Mike’s memory can be made to the Virginia Tech Foundation in support of the dairy judging team, to the Blacksburg Volunteer Rescue Squad, or to the University of Connecticut 4-H Foundation