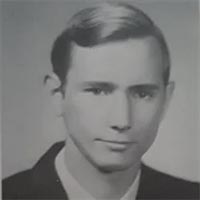 James “Jimmy” Edward Barlow, age 72, of Blacksburg, VA (formerly of Florence, MS) passed away Friday, June 5, 2020 at his daughter’s home. He was born in MS on February 8, 1948 to the late Hugh Hartsell and Vera Palmer Barlow. He was also preceded in death by his brother, Kenneth Wayne Barlow, his son-in-law, James Copeland, Jr., and his beloved dog, “Sally”.

After graduating Florence High School in 1967, Jimmy enlisted in the Army. He served his country during the Vietnam War. Upon returning, he worked in small engine repair shops; his last place of employment being Flannigan Electric Co. in Jackson, MS.

Graveside service will be held at 10am on Thursday, June 11, 2020 at the Florence City Cemetery in Florence, MS. In lieu of flowers, donations can be made to Good Samaritan Hospice, 1160 Moose Dr, Christiansburg, VA 24073.