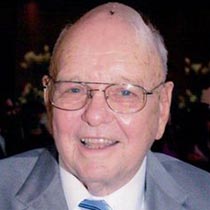 John A. Ballweg, 89, of Christiansburg, Va. passed away on Monday, August 1, 2016. He was born in Spalding, Neb. on November 27, 1926 to the late John and Mary Ballweg. He was predceded in death by his first wife, Genevieve Ballweg.

He is survived by his loving wife, Armida; and two sons, Mike Ballweg of Glen Allen, Va. and Bill Ballweg of Oxford, Ga.; along with his brother, Frank, of Spalding, Neb. In addition, he is survived by five surrogate daughters, Shari Ballweg daughter-in-law of Glen Allen, Va., Robin Martin of Oxford, Ga., Jandy Rodriguez, step-daughter of La Palma, Calif., Sheila Marquis, health nurse of Christiansburg, Va. and Patrizia DeFabrizio of Studio City, Calif. for whom he had always been her “Tatay” (father). He also has two stepsons, Joy Calva and Clard Calva of Caloocan, Philippines.

A member of Holy Spirt Catholic Church, he was active in the Knights and Columbus and the American Legion. His military service was with the United States Army during World War II and the Korean War.

Visitation is scheduled from 4 to 7 p.m. on Friday, August 5, 2016 at McCoy Funeral Home, 150 Country Club Dr. SW in Blacksburg. The funeral is scheduled for 11 a.m. on Saturday, August 6, 2016 at Holy Spirit Catholic Church, 355 Independence Blvd., in Christiansburg.

In lieu of flowers, you are encouraged to consider making a donation to Spalding Academy, 130 Marguerite St., Spalding, NE. 68665. Arrangements by McCoy Funeral Home, Blacksburg.