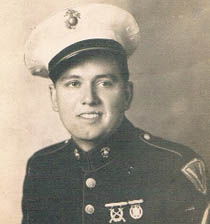 William (Bill) Howard Ballard, 96 of Pearisburg, VA., went to be with the Lord on Friday, February 19, 2016 at Carilion Giles Community Hospital in Pearisburg. Bill was born on September 24, 1919 in Salt Sulphur Springs, WV and was a son of the late Harry Clifford Ballard and Mary Ballard Ballard.

Besides his parents, he was preceded in death by his wife of 68 years, Kathleen Ratcliffe Ballard, three sisters, Rita Mae B. Vass, Katherine B. Ellison, Mary Edith Ballard, one sister-in-law, Frances Ratcliffe Morris and one brother-in-Law, Harry Ellison.

Bill was a very proud Marine having served in World War II with the 5th Marine Division having fought in Iwo Jima. He was retired from the Celanese Plant in Narrows, was an active member of the First United Methodist Church in Pearisburg around 70 years and was a loving husband, father, grandfather and great grandfather.

Funeral services will be conducted Sunday, February 21, 2016 at 2pm at the First United Methodist Church in Pearisburg with the Rev. Dr. Brian Burch and the Rev. Dr. Fred L. Austin officiating with burial following in the Birchlawn Burial Park in Pearisburg.

The family will receive friends at the Givens Funeral Home Saturday evening from 6 – 8 pm. The family would like to thank his many special friends and neighbors and would also like to thank the wonderful staff at Carilion Giles Community Hospital. Full military honors will be given by the United States Marine Corp. Online condolences can be sent to the family at givensfuneralhome.com.