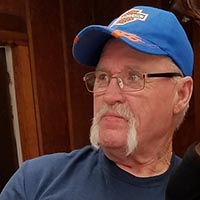 Randy was a unique individual when it came to relationships he had. As many people called him dad or grandad and those that called him Randy or RB. Children loved him and he loved them. As I began to include those surviving him I thought of this person or that person that had a brother, son, daughter or grandchild that bonded with him and it would not be fair to list some because he honestly was family too so many.

The family is receiving friends at Valley Harvest Ministries in Dublin from 11am to 1 pm on Saturday, July 14, 2018 with a Celebration of Life at 1pm with Pastor Perry Slaughter officiating. Interment will follow at Birchlawn Burial Park in Pearisburg Virginia.

His family hopes that those sharing his passion for riding motorcycles will follow him on his last ride on his bike to his final resting place.

In lieu of flowers donations can be made for funeral expenses to Truliant Federal Credit Union, 7321 Peppers Ferry Boulevard, Radford, Virginia 24141, in the memo you may write in memory of R.B. Bales Sr. The Bales family is in the care of Givens Funeral Home in Pearisburg. Online condolences can be sent to the family at givensfuneralhome.com.