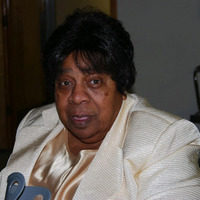 Shirley Mae Williams Todd Baker entered into eternal rest on December 14, 2019, surrounded by her family in Dublin, Virginia. Shirley was born September 12, 1927, in Dublin, Virginia, in the home of her parents, the late James H. Williams and Grace Poindexter Williams. She was delivered by a midwife who also happened to be her Aunt Mamie Poindexter. She was the youngest of 12 children, all of whom preceded her in death. In 1947 she married Jacob G. Todd, and to this 13-year union was born nine children. In 1967 she was remarried to Charles L. Baker of Washington, DC.

Shirley received her education in the segregated schools of Pulaski County. However, her education continued throughout her life, as she was the quintessential lifelong learner. Mother, as her children and grandchildren refer to her, studied the culinary arts in New York City, which led to a lifetime career as a chef in many establishments, including her restaurant and catering businesses. She also studied cosmetology in Washington, D.C. For many years, Mother was the head chef at the Red Carpet Inn in Pulaski, followed by the Pulaski Moose Lodge and Pulaski County Country Club. In these positions, she established a reputation for fine dining and exceptionally prepared and exquisitely presented food. Most of her recipes were her creations out of the depths of her creative and curious mind. She took pleasure in creating dishes that were delicious to taste and beautiful to the eye. But cooking was not her only talent. She was handy, and her children are fond of saying she could fix anything with a hammer, nails and duct tape. Mother loved nature and for many years managed a small farm, growing vegetables and raising animals to feed her large family.

Mother was a longtime member of Showers of Blessing Church of God in Christ in Dublin, Virginia, where she served as Church Mother. She loved the Lord with all her heart and truly believed that “prayer changes things.” She was a founding member of the New River Valley Women’s Prayer Breakfast that lasted for 15 years. For the past three years, she prayed daily with a telephone prayer group of believers from around the nation. Shirley loved her family dearly. She taught her children to have faith in God, work hard for what you want, and give to others in need. Her life was an example of the Proverbs 23 women. She took special delight in her grand, great grand-, and great, great grandchildren. The children kissed her freely and loved to chat with Mother.

There are no words to express our sincere appreciation for all of the love, kindness and care this community has shown our Mother during her latest illness and throughout her declining years. To Mother’s Pastors Stephan and First Lady Dee Muse, we say thank you for all of the love, concern and compassion you showed to our Mother. With grateful hearts we thank you. We extend special thanks to Dr. Charles Judy, MD her doctor and prayer partner. Dr. Judy provided Mother with far more than just care for her aging body; he cared about