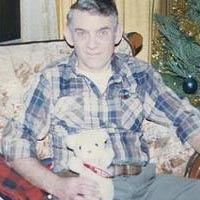 Thomas Patterson Bain, age 84 of Dublin passed away Monday, August 11, 2014 in the New River Valley Medical Center. Born December 4, 1929 in Radford, he was the son of the late Charles Bain and Beulah Corvin Bain. He was also preceded in death by his wife, Margaret Louise Enoch Bain.

He was a veteran of the United States Army during the Korean War. He was retired from Lynchburg Foundry,Radford.

Graveside services will be Friday, 12:00 noon, August 15, 2014 at Highland Memory Gardens, Dublin with Rev. Marcus Harris officiating. Interment will follow with military honors conducted at the gravesite by the Pulaski VFW Post #1184.