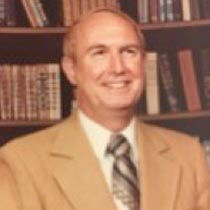 William Lansing Ayres, a United Methodist minister for forty years, passed away quietly early Thursday afternoon, March22nd at The Crossings of Blacksburg, Virginia. He was 88.

He was predeceased by his first wife, Ann Ayres. Left to cherish his memory are his current wife, Eleanor (Sally) Davis, his sisters, Annette Andrews, Aggie Mallory, and Ginny Johnston, his son, Bill Ayres, Jr., his daughters, Patti Talbot and Debbie Cockerham, sons in law Lee Talbot and Mike Cockerham, a daughter in law, Gayle Ayres, granddaughters Samantha Lowell, Amy Cockerham and Anna Cockerham, grandsons Jamie Talbot and Jon Talbot, great grandsons, Ian Bravo Lowell and Jacob Talbot, and a great granddaughter, Claire Talbot. With his marriage to Sally, his blessings of family extended to include her children, Tom and Glen Davis along with their wives, Judy and Terri, six grandchildren and eleven great grandchildren.

Special thanks and gratitude to the staff at The Crossings who treated him with such love and patience in his last days. Also to those friends and members of his various churches who came to visit him in later years. They told him how much his counseling meant to them. They remembered working with him for Habitat for Humanity, Meals on Wheels, The Montgomery County Christmas Store, and traveling with him to help the victims of hurricanes. They remembered the Sunday School classes he taught and his good works.

As a minister and as a man, he championed civil rights, women’s rights, the cause of all those excluded or looked down on because of their poverty, sexuality, race or nationality. It wasn’t always easy but it was what the Bible told him to do.

A number of his sermons are available on “My Father’s Blog” (blogofmyfather.com). Making them accessible was something he worked on with his daughter, Patti, during his last days. Read them.

He was an avid Hokie fan and a man who did his best to make it to the plays and recitals and the baseball games, soccer games, and basketball games of his children and grandchildren.

He loved gardening and fishing. He loved singing with the Joy Singers. He could milk a cow. He could square dance. He could do pushups until he was well into his eighties. He always had room for dessert.

Though he could lose his temper, he handled setbacks with grace and was truly grateful for all God had given him. He was a thoughtful, loving, kind, affectionate man. He will be missed.

In lieu of flowers, donations can be made to St. Paul’s United Methodist Church or Habitat for Humanity. Arrangements by McCoy Funeral Home, Blacksburg.