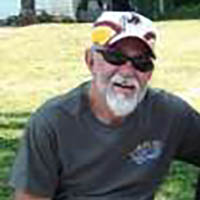 Danny was drafted in the Army and deployed for 13 months to Vietnam. He spent most of his career in construction and later owned and operated his own painting company. He had an eye for design and a green thumb for landscaping. He took pride in his workmanship and it always showed in everything he did. He loved to collect cars and put a lot of love and care into them, making them his own.

Danny was the life of the party and his smile was infectious. He would do anything for anyone and always worried about himself last. No one was ever left out and he welcomed all new friends and family with open arms. After retiring to Ripplemead, VA, he spent his free time antiquing, taking road trips with his best friend and wife, Bonnie and his beloved pup Cooper. He looked forward to weekend visits with his son, daughter-in-law and his granddaughter and his visits to Florida to see his daughter and son-in-law, grandchildren, great grandchildren, and brother, Jerry.

Danny is survived by his loving wife of 37 years, Bonnie; brother, Jerry Austin of Homosassa, FL; Aunt, Shirley Honeycutt of PA; son, Jeremy Austin and his wife, Marcie, and daughter Dana Davis and her husband, Rob; 2 grandchildren-Kathryn Austin and Kevin Davis, and 3 great-grandchildren, Isaiah, Anabella and Tommy; Brother-in-laws, Jimmy Tickle, his wife, Tracy, Larry Tickle and Linda Anderson, and Andy Tickle, and his wife Maureen; and a host of nieces, nephews and cousins. He is preceded in death by his parents, Dewey and Dorothy; father-in-law and mother-in-law, Harvey and Lola Tickle and brother-in-law, and sister-in-law, Danny and Dana Tickle.

Online condolences may be sent by visiting www.kendallfuneralhome.com. The Staff of Kendall Funeral Home are honored to be serving the Austin Family.