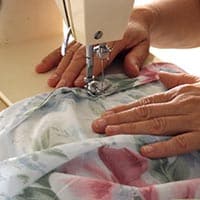 Peggy Lucille White Aust, 94, of Pulaski, VA wa born April 24, 1926 and passed away December 19, 2020. She is now with her Lord and Savior Jesus Christ. She was the daughter of the late Ernest Franklin White and Ruby Chaffin White.

Peggy graduated from Pulaski High School 1944. She worked at McCrory’s Dime Store, C&P Telephone Company as an operator, alterations at Mason’s Cleaners, Park Belk’s, and Hatcher and Askew. She was well known and loved being a seamstress since 1946.

Peggy was the President of the Women’s Work and Chairman of Circles several times at Anderson Memorial Presbyterian Church. She was a member of the Eastern Star, Girl Scout Leader and chaperoned many band trips with son Richard and daughter Patricia, two different generations. She used her talents and sewed many Majorette uniforms and Flag Corp uniforms.

There will be no visitation as it was her wish for immediate cremation. A private burial will be held at Southwest Virginia Veterans Cemetery, Dublin, VA as her ashes will be placed with her deceased husband, Glen K. Aust.