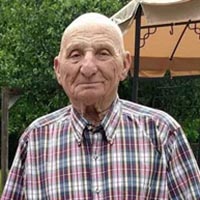 Billy Lewis Atkinson was born to Robert and Goldie Atkinson. He grew up in Piedmont (Otey) and attended school there.

Billy loved riding his motorcycle. He often bragged about logging over 1 million miles and “wearing out 18 Honda Shadow motorcycles”. One of his last long road trips was to see the Grand Canyon and he rode alone the whole trip. He actively rode until he was 92 years old. The family rejoices that he knew Jesus Christ as his savior and is in heaven today!