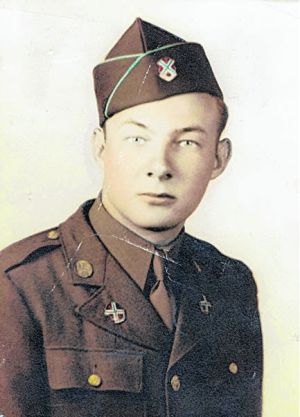 Richard Earnest Atkins Sr., age 90, of Elliston, passed away on Wednesday, June 25, 2014. Born November 3, 1923 in the Potlikker Flats area of Blacksburg, he was the third of 12 children, born to Dick and Eva Atkins. Lying about his age, Richard joined the Army at the age of 16, he was one of the last remaining D-Day Veterans, who served with the Bedford Boys in the 29th Infantry Division; this was a part of his life in which he took great pride. He received the Purple Heart during his time of service.

He will always be remembered for his abundant vegetable gardens and wood working, along with his uncanny ability to count cards, while playing Rummy and Spades with his family.

The family will receive friends on Sunday, June 29, 2014 from 5 to 7 p.m. at Lotz Funeral Home in Salem, Virginia. Funeral Services will be held at 11 a.m. on Monday, June 30, 2014 at Lotz Salem Chapel. Burial will follow in Sherwood Memorial Park.

Donations may be made in his memory to the Shawsville Rescue Squad, 6620 Roanoke Rd, Shawsville, VA.