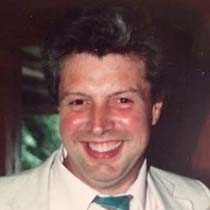 ur dad, Leslie Peter Ash, died peacefully on Friday, August 12, 2016, in the loving care of his family, over hearing the noises of Claytor Lake, a place that brought him happiness for almost thirty years.

Peter, as he preferred to be called, was born and raised in the Midlands of England, January 4, 1945. After immigrating to the United States in 1969, Peter met and married Virginia Ash, and together, they raised and educated a big beautiful family in Northern N.J. After 20 years of vacations on Claytor Lake in the family cabin, in 2007, Peter made a permeant home in Southwest Va. In those final years by the lake, Peter would often confide to his children that he had found a sense of fellowship with neighbors and the church community unlike any other he had known before.

Peter will be remembered by all as the kindest of men with a loving generous soul, warm smile, gentle way and charming English wit. He was hard working, could fix just about anything and was always quick to help others in any way he could. As a father, he worked to offer his children the world and encouraged them to strive for their dreams as he had done through travel, raising a family, pursuing several careers in the trades and real estate, boating, and in his final years, building a house on Claytor Lake.

Peter is survived by his ex-wife, Virginia Ash, who, after 34 years of marriage, remained his most loyal friend and partner; son, Jon and wife, Collen, and their children, Keira, Lila and Jameson; daughter, Erika and husband, Loren, daughter, Cori; son, Tim and fiancé, Eilene; his nieces, Joanna and Carol; nephew, Walter; cousin, Sister Pat, the whole Strenz family and Claytor Lake kin.

In keeping with Peter’s generous spirit, he has asked that in lieu of flowers, donations be made to the Garden City Harvest Youth Farm, a nonprofit vegetable farm and employment program for youth living in foster care that is operated in Montana by his daughter, Cori. Donations can be made during Peter’s service at 11 a.m., at Saint Edwards Church, Tuesday, August 16, 2016, or mailed to Garden City Harvest-Youth Farm at PO Box 205 Missoula, Montana, 59806.