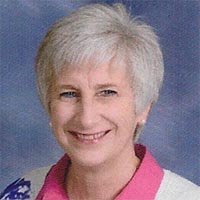 Terry Arney Arthur, of Blacksburg, was born April 18, 1953 to Robert and Ruby Arney who predeceased her along with her older brother Bobby. She moved to her eternal home on April 8, 2020; by her side were her husband and children who she loved dearly.

Terry leaves to cherish her memory her husband of 45 years, Sean, her sons Jon and Rob, her daughter Emily and grandchild Jackson. A loving memory is also shared by her brother Doug, sister Betty, and many nieces and nephews on both the Arney and Arthur sides of the family.

Her lifelong priorities were to her Lord and Savior, Jesus Christ, her Family, and her Friends. Her Christian actions, displayed through her worship, commitment to her church, and the sharing of her beliefs were a testament to her love for the Lord and all others. Terry was a faithful member of Blacksburg Christian Church where she taught Sunday school, served as Board Chair and presided over numerous church committees.

Terry was a devoted wife to her husband, Sean, and was a loving mother to her three children, Jon, Emily and Rob. She perceptively nurtured her husband’s Christian beliefs and his understanding of what Love was really about. She reared her children in a warm, caring and affectionate atmosphere. When it came to her family, harsh words were not in her vocabulary, only word of encouragement, love and a steadfast guidance that reflected her morals and beliefs. She was the model wife and mother.

Terry also played the piano and organ at Blacksburg Christian Church (Disciples of Christ) for more than 35 years. Her interest in music was evident as a pre-teen, and at which time she began playing the piano at her hometown church in Morganton, N.C. She studied Music and History at UNC-Greensboro where she received her BA in History.

Terry and Sean were married on January 4th, 1975. In 1979 they moved to West Lafayette, IN where she taught at Indiana Vocational Tech. While in Indiana, she received her Master’s degree from Purdue University in Guidance and Personnel. In 1983 she and her family (Sean, Jon and Emily) moved to Blacksburg, VA. Rob was born 3 years later. During the early years in Blacksburg, Terry was a “stay at home” mother who relished her time to guide and nurture her children during their most formative years, and to be involved in their daily activities. At the same time, her prominent involvement with the rearing of the children provided her husband, Sean, with the necessary flexibility to navigate the pre- and post-tenure structure at Virginia Tech.

As all will attest, Terry lived by the passage “Love your neighbor as yourself.” There will be a private family graveside service. Memorials in Terry’s name can be made to the Blacksburg Christian Church.