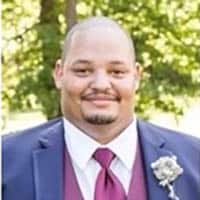 Ryan Nathanael Apgar, just 5 minutes shy of his 32nd birthday, passed into his forever home in Heaven on Monday January 24, 2022. He was born on January 25, 1990, in Lancaster, PA, and was adopted by his parents James and Cheryl Apgar of Warrenton, VA.

While being home schooled, he participated on competitive soccer, basketball and swimming teams, and coached U-8 soccer. He graduated from Appalachian Bible College in Beckley, WV, in 2012 with a Bachelor of Arts degree, double major in Bible/Theology and Camping Ministry.

Ryan had a passion for worship and after college was a worship leader for four years at Discipleship Community Church in Front Royal, VA. It was there that he met his future bride, Parker Fields. Ryan and Parker were married in 2019. They joined Hope Church NRV in Pearisburg where he joined the worship team and eventually became the youth leader. Ryan was a delivery driver for FedEx where he quickly became very popular with his customers in the Giles County area. He excelled at piano and guitar and was teaching himself to play the drums.

Besides his parents and his wife, he is also survived by his siblings Sarah (Emmanuel) Bockarie and Emily Apgar.

Visitation will be Friday evening, January 30, 2022, from 6:00PM until 8:00PM at the funeral home. Online guestbook can be signed or condolences may be sent to the family at www.broyles-shrewsbury.com. Arrangements by Broyles-Shrewsbury Funeral Home, Peterstown, WV.