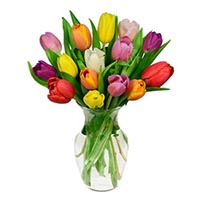 Dora Jones Anfin, 82, of Radford, Va., died Tuesday, October 10, 2006. Mrs. Anfin was born August 22, 1924 in Radford, Virginia. She was the daughter of the late Thomas Mount Jones and the late Louise Henley Jones. She was preceded in death by her husband William Lloyd Anfin.

She and her husband, Lloyd, owned and operated Lloyd’s Fine Men’s Wear from 1954 until their retirement in 1981. She was an alumna of Longwood College, where she served as president of Sigma Sigma Sigma sorority. She also served on the Longwood College Board of Visitors from 1978 to 1982. She was a life-long member of the Presbyterian Church of Radford where she was an elder, a deacon, and served on numerous committees. She was a member of the Radford chapter of PEO.

A worship service celebrating her life will be held at the Presbyterian Church of Radford at 11 a.m., Friday, October 13, 2006. The family will receive friends in the fellowship hall immediately following the service. The family suggests in lieu of flowers memorial gifts be made to the Presbyterian Church of Radford, 201 4th Street, Radford, Virginia 24141 Arrangements by DeVilbiss Funeral Home.