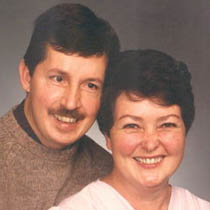 In 1976 Janet worked with the Blacksburg Police Dept. as a secretary. She later became the meter maid. Janet obtained her Registered Nurse degree in 1981 and worked at Montgomery County Hospital, after which she served as a home health nurse.

Anyone who knew Janet knows what a beautiful person she was. She had a very hard life but always managed to keep a smile on her face. She will surely be missed by all who knew her.

Janet was preceded in death by her father and mother, John and Kathleen Burton; her son and daughter, David K. and Erika Anderson; and by her sisters, Nita and Patty. She is survived by her brother, Benny Burton of Chilhowie, Va.; nephews, A. W. and Phillip Powers; and cousin, Judy Hughes. Also left to cherish her memory are her lifelong best friends, Bonna Keeley, Betty Pannell, and Linda Songer Hurst (whom she loved and thought of as her sister); and companion, David L. Songer of Blacksburg. David and Janet were married in 1978 and later divorced in 1985. They renewed their friendship in 2006 and were living together for the past five years.

We will remember her forever for her tender hugs and unconditional love. Janet would want you to remember her with a smile and know that she is reunited with her children and family.

Because she had no close family members living, she wished to have no funeral or memorial service. Her cremains will be placed with her children at Temple Hill Memorial Park, Castlewood, VA. Online condolences may be left at www.hornefuneralservice.com.