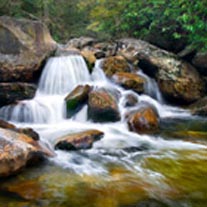 Wilbur Franklin Amonette III , 90, passed away Friday, May 2, 2014 at his home in Radford. At his side were his four children, son-in-law, daughter-in-law, two grandchildren, a niece and three caregivers. He was preceded in death by his wife, Betty Amonette and sister, Hilda A. Slusher.

Wilbur Amonette was born April 2, 1924 in Lynchburg, Va. to Wilbur F. Amonette Jr. and Ethel Nash Amonette. They lived in Lynchburg for eight years and Danville for four years until 1936, when his father transferred to Radford, Va. Wilbur graduated from Radford High School in 1941 and enlisted in the U.S. Navy V-12 Program while at Hampden Sydney College. He graduated from Hampden Sydney College with a B.S. Degree in 1944 and was stationed at Quantico Marine Base for a short period before being sent to the Medical College of Virginia where he graduated with an M.D. Degree in 1948. He married Mary Elizabeth Kay in June, 1948 and lived in Philadelphia, Pa. 1948-1949 while serving in an internship at the Philadelphia Naval Hospital. In July, 1949 he enlisted in the newly-formed U.S. Air Force and was stationed at Bolling Air Force Base in Washington, D.C. until discharge in 1951. He was at the McGuire Veterans Hospital in Richmond, Va. from 1951 to January, 1955 when he completed his training in Internal Medicine Specialty. He moved to Radford, Va. and was in the private practice of medicine starting out by himself and adding four doctors to his practice over the years. He left private medical practice in 1976 to start the Radford Community Hospital Emergency Room where he worked for several years. He went back into private practice with Dr. Richard Robertson for several years following which he worked for the Commonwealth of Virginia Dept. of Corrections on a regular basis until December, 2008 when the facility where he worked was closed due to the poor economy. After that time he continued to take calls for other physicians in the Dept. of Corrections until his wife’s illness in 2011.

Throughout life Wilbur Amonette extended himself toward others in his family, his community, his country, and his work. He had an uplifting presence that was easily taken for granted. He was an “old spirit” with good intuition–a man of contemplation and few words-speaking words that really count. He had the energy and drive to excel. He took an individual interest in the lives of his wife and children and was supportive and protective of them. He enjoyed basketball, tennis, and ping pong with his family and in the community and excelled in stamp collecting and woodworking over the years. His interests live on in one family member or another. His knowledge, wisdom and presence are missed, but his example lives on. He has left the world a better place.

Funeral services will be held Tuesday, May 6, 2014, at 11 a.m. at The Presbyterian Church of Radford, with the Rev. David Dickerson officiating. Interment will follow in Sunrise Burial Park in Radford.

Wilbur Amonette’s wishes for his funeral include making donations to the Presbyterian Church of Radford Memorial Fund, 201 Fourth St., Radford, VA 24141, in lieu of sending flowers. The family will receive friends from 6:30 p.m. until 8:30 p.m. Monday, May 5, 2014, at the Mullins Funeral Home in Radford www.mullinsfuneralhome.com.