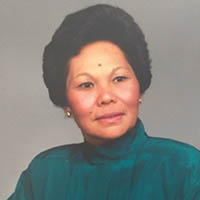 Soledad Baguio Ames, age 83, died on Saturday, February 22 in Richmond, Virginia. Soledad was born in Cebu, Philippines. As a child she survived the invasion of the Philippine islands during World War II by the Japanese.

She moved to Manila as a young woman where she met and married her husband, Raymond Edward Ames. They had four children, Raymond (Rick), Dolores (Dee), David (Patrick), and Margaret. Raymond was a widower who had five children when they married.

Their large family lived in Manila, Taipei and Singapore while Raymond worked as an executive with Westinghouse Electric. Every summer they returned to the U.S. spending time at their vacation home in Sanibel, Florida. They moved to Blacksburg, Virginia in 1980 when Raymond retired. Raymond died in 1982.

After Raymond’s death, Soledad was a realtor for several years. Her love of travel led her to become a travel agent and she opened her own agency, Travel del Sol. She loved taking tour groups to Rome and the Holy Land. She was a longtime member of St. Mary’s Catholic Church. She enjoyed arranging flowers and holiday decorations as well as assisting in other ways in the parish. She also loved the ocean, gardening, baking and decorating cakes.

The funeral mass scheduled for March 21 has been canceled. A funeral will be announced at a later date.