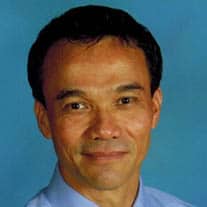 On January 27, 2022 Raymond “Rick” Richard Ames, age 57, passed away after a short battle with cancer. Rick was born September 19, 1964 to Raymond and Sol Ames in Manila, Philippines.

He attended school in Southeast Asia until the family moved to Blacksburg, Virginia in 1980. He graduated from Blacksburg High School in 1982. He attended Georgia Tech University for several years studying Aerospace Engineering after graduation. Following his father’s death, he left Georgia Tech and traveled and worked across the country.

He returned to the east coast to attend St. John’s College in Annapolis, Maryland. After graduating from St. John’s in 1994, Rick felt the need to serve his country and joined the U.S. Army. He served in the 325th Airborne Battalion Combat Team which is part of the 82nd Airborne and was deployed to Bosnia. After his time in Europe he returned to civilian life and pursued his master’s degree concentrating in Education.

After the tragedy of 9/11, Rick served in the Army Reserves in Civil Affairs in both Afghanistan and Iraq for several years. He attended Defense Language Institute in Monterey, California and studied Arabic. Rick was honorably discharged as a Sergeant First Class and settled in Richmond, Virginia. He taught high school honors math and coached the Robotics team at J.R. Tucker High School. He put his teaching career on hold for several years to care for his mother, Sol, who had severe dementia. After Sol’s death in 2019, he returned to teaching at Falling Creek Middle School. He taught math until his death.

Rick was devoted to learning and bettering his students. Seeing their success in class and in life brought him joy. He lived his life in service to others and his country. He loved travel, opera and art. He also enjoyed classic cars and motorcycles.

Rick is preceded in death by his father, Raymond, his mother, Sol and his beloved dog Katie. He is survived by his brother, Patrick, sisters Margaret and Dolores and his dog Luka as well as many nieces and nephews.

Rick will be buried at the Virginia Veterans Cemetery at Amelia. A private memorial will be this spring. Memorial donations may be made to St. John’s College, Annapolis, MD or Circle Center Adult Day Services, Richmond, VA or sent to Patrick Ames at 3420 S. 222nd Street, Elkhorn, Nebraska 68022.