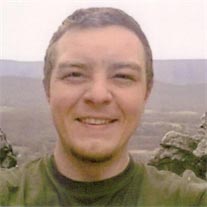 William Alexander Altizer, 28, of Blacksburg went to heaven on Thursday, March 3, 2016. He was born July 14, 1987. He graduated from Christiansburg High School in 2005. He has worked for Kroger for the past 7 years. He was presently attending New River Community College.

He was a very talented musician and singer. He loved playing guitar, singing country and blues songs, nature, hiking, fishing, canoeing, and kayaking. He especially enjoyed doing things with his many friends. If life was measured in friends, Alex would be a most blessed millionaire. Richard and Deneise would like to thank all of his friends for the love and support that they gave Alex and have given his family. We love you guys!

Alex is preceded in death by his maternal grandmother, Glenna Austin; his paternal grandfather, Don Altizer; and his uncles, Jim Altizer and John Richardson.

Richard and Deneise would also like to thank their family and many friends for their love and support. Special thanks to the Montgomery County Schools family; the Blacksburg South Main Kroger family; the Fairfield Echols/English Construction family; Christiansburg Church of the Brethren and Calvary United Methodist Church for their love and support of Alex and our family.

There will be information forthcoming regarding a music scholarship in Alex’s honor and memory. Please check facebook for details.

The family will receive friends on Monday, March 7, 2016, from 5-8 p.m. at Horne Funeral Home. The Funeral Service will be held Tuesday, March 8, 2016 at 11 a.m. at the Christiansburg Church of the Brethren, with Rev. Dan Whitlock and Rev. Don Peters officiating. Interment will follow in Sunset Cemetery.