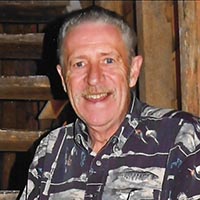 Kenneth Woodrow Allen, 71, of Peterstown passed away suddenly on Thursday, April 9 2020. Kenneth was a lifelong resident of Peterstown and was the only child of Frances Lane Allen who is currently 96 years old and resides at 264 Summit Drive. Since the death of his father, Woodrow “Pud” Allen , in 2008, Kenneth has been the sole caregiver for his beloved mom. He is also predeceased by his second wife Lelia B. Allen.

After graduation from Peterstown High School, class of 1967, Kenneth worked at the Celanese Corporation for 4 years and then became a telephone lineman for the C & P Telephone Company where he worked until his retirement in 2001. In his younger years Kenneth was a drummer in several local bands including the Blue Diamonds, the Jacks and Classical Vantage. His love of music remained throughout his life. Kenneth was an avid fisherman competing in tournaments in the tri-state area and enjoying deep-sea fishing with his father.

Kenneth is survived by a son Travis Layne Allen of 308 Buffalo Mt. Lane, Unicoi, Tennessee 37692 and a daughter Melia Allen Fleeman and her husband, Chad Fleeman of 113 Woodbriar Drive in Johnson City, Tennessee 37604. The joy of his life rested in his three grandsons. Chadwick Kincade Fleeman, 16, Braxton Cole Fleeman, 13, and Cooper Layne Fleeman, 8. Kenneth’s happiest days were spent watching Cade run a touchdown for Science Hill, Cole bust through the line for Liberty Bell or Cooper catch a line drive for a double play. He photographed all the boys’ sporting events and travel baseball for all 3 boys as his summer pastime. With Chad’s coaching experience, Melia as nurse and team mom, Uncle Travis and ‘PAPAW KENNY” only had to cheer them on. Accompanying him to all these “Fleeman Boy” events was his first wife and dear friend, Jeanne Allen. The memories are priceless and we know now he’ll have a ring-side seat for all their future events.

Graveside rites will be held at 1:00 p.m on Saturday, April 11 for family members. The family would appreciate condolences and online messages through Broyles Shrewsbury Funeral Home at www.broyles-shrewsbury.com . “Mamaw Allen” especially would love a card or a note.