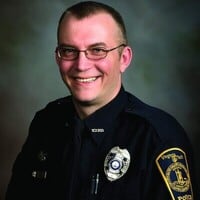 Geoffrey Lynn Allen, Jr. departed this life and stepped into eternity on January 17, 2022. “Geof” will be remembered as a loving husband, a beloved brother, son, uncle, and grandson, a veteran of the U.S. Navy, and a devoted member of the Virginia Tech Police Department.

Geof was born April 22, 1973 in Blacksburg, Virginia. He met his future wife, at the tender age of three in Ms. Oakley’s preschool class. Geof graduated from Giles High School in 1991 where he and his bride were crowned prom king and queen in their senior year. One of Geof’s proudest accomplishments was hiking the entire 2,190 miles of the Appalachian Trail in 1993. Geof enlisted in the United States Navy in 1994.

Shortly after enlisting in the U.S. Navy, Geof married the love of his life, Shannon, in 1995. Geof and Shannon had the kind of love only written in fairy tales and their love only grew stronger through their 27 year marriage. Geof and Shannon then moved to the Naval Air Station in Pensacola, Florida. He served as legal yeoman for the Blue Angels flight team and reached the rank of petty officer third class. After his time in the military, Geof was employed as a drill instructor at Rebound Camp Kenbridge where he worked rehabilitating troubled teens.

Geof and Shannon then moved back to their native Giles County and Geof began working as a dispatcher with the Virginia Tech Police Department. In 2003, after excelling in that capacity, Geof was appointed as a Virginia Tech officer where he served for 19 years. During his time with the VTPD, Geof established a student police academy where Virginia Tech students could explore a career in law enforcement. Some of those students, upon completion of their undergraduate work and further training, came back to work with VTPD and always credited Geof with their success. He became a certified Crime Prevention Specialist and was committed to educating the Virginia Tech community on how to prevent becoming a victim of crime. Because of his response to the Virginia Tech mass shooting of April 16, 2007, Geof was awarded the VTPD Medal of Valor, the highest honor bestowed on a Virginia Tech officer, as well as the International Association of Campus Law Enforcement Administrator’s Award for Valor, and was a Top Cop nominee. In 2009, Geof was honored to receive the President’s Award for Excellence which is awarded to a Virginia Tech employee who made extraordinary contributions to Virginia Tech by consistent excellence in the performance of their job. Geof was awarded the Meritorious Service Award for his actions surrounding the tragic death of a fellow officer in 2011. In 2013, he was awarded the Vice President’s award in recognition of exceptional service to Virginia Tech. Geof received the Life Saving Award in 2014 for his bravery and quick response following a motor vehicle accident in which he was able to revive a victim of the crash. Despite all of these honors, Geof was most proud of being part of the elite Virginia Tech SWAT team and thought of his team more as brothers than fellow officers. Geof spent his life serving and sacrificing for others in many different capacities.

Yet through all of this, he remained a loving and devoted husband to his beloved Shannon. Geof had a wonderful sense of humor. Wherever Geof was, laughter was near. Geof was seldom seen without a cup of coffee in his hand and he made it his life mission to convert everyone he met into a coffee drinker. Geof was seldom at a loss for words and rarely met a stranger. Geof has touched so many lives and continues, even in death, to be a positive influence in his community and beyond. He leaves behind a legacy that will not soon be matched.

A memorial service honoring Geof’s life will be held at Riverview Baptist Church in Ripplemead, Virginia on Saturday, January 22, 2022 at 12:00 pm. The family will receive friends at the church prior to the service between the hours of 10:00 am and 12:00 pm. In lieu of flowers, the family is asking for memorial donations to be made to the Huntington’s Disease Society of America. https://hdsa.org/get-involved/tribute-memorial-donations/ A guestbook is available to send condolences to the family or share a sweet memory of Geof with the family by visiting www.kendallfuneralhome.com. The staff of Kendall Funeral Home are honored to serve the Allen Family.