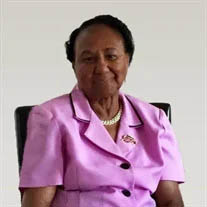 Lillie Mae Hash Alexander, 91 of Christiansburg, VA passed away peacefully on Sunday May 15, 2022, surrounded by her children and grandchildren. Lillie was born at home in Woodlawn, VA on September 15, 1930, from the union of the late Charlie Younger Hash and Jennie Geneva McMillan.

At a very early age, Lillie was baptized and became a member of Bethany Baptist Church in Woodlawn, VA. Lillie attended a one-room school in Woodlawn, VA for African American students until the 6th grade and then continued her education at Kimberly Park School in Winston Salem, NC. Lillie later attended La May Cosmetology School and additionally had further education at Christiansburg Industrial Institute (CII), the first African American School, founded in 1866.

Lillie was a member of the CII Women’s Glee Club, a cheerleader, and had a talent for creative writing. Lillie co-founded a local gospel group performing on Roanoke television stations, local radio shows and churches. Lillie met the love of her life and future husband of 60 years, Willie Reed Alexander, II. Lillie graduated Salutatorian, from CII class of 1948.

Lillie was a devoted and faithful member of Holy Faith Church of God in Christ and later joined Greater Mount Zion United Holy Church where she held the position of Church Mother for many years until she was unable to serve in this official capacity. Lillie was affectionately known as Lillie Mae, Mama, Ma Mae, Nanny, and Aunt Lillie. Lillie Mae Hash Alexander will forever be loved and remembered by many family and friends.

A Celebration of Life will be held Saturday May 21, 2022 at 1:00 PM at Horne Funeral Home located at 1300 N. Franklin St. Christiansburg, VA with the Elder Marlin A. Reeves II officiating. Interment will follow at Shaeffer Memorial Cemetery in Christiansburg.