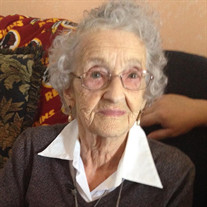 Stella Rakes Akers entered her heavenly rest on August 19, 2018 after receiving care from her family in her home per her desire. She was born on June 23, 1924 in Shawsville, Va. to Samuel Rakes and Matilda Akers Rakes.

Stella’s parents house burned down a week before she was born so her father and older brothers Wilton and Mason cleared out a place in their barn where she was born. She spent most of her childhood living on the land where Camp Alta Mons now is in Shawsville. Stella married D. Kenneth Akers Sr. in 1945 and lived at the Alta Mons property for two more years until they moved to Christiansburg where Stella lived for the rest of her life.

Stella spent her 71 years in Christiansburg raising her 3 sons, Doyle Kenneth Akers Jr., Terry Dwayne Akers, and Mark David Akers, as well as being a good neighbor and a faithful member of the Christiansburg Church of the Brethren. She was always concerned with the needs of persons that had experienced loss or health issues and did her best to help when she could. Some may have called her spunky and some may have called her feisty but all called her caring.

Stella was preceded in death by her parents Samuel and Matilda, her husband of 42 years Kenneth, and her son Terry. She is survived by her son Doyle and wife Linda, daughter-in-law Debbie Trump Akers and her son Mark and his wife Margie. She has seven grandchildren Wendy and Wayne Clark, Brian and Tara Akers, Troy and Nancy Akers, Joshua and Martha Akers, Daniel Akers, Amber and Nick Ogle and Amy Akers. She also has 10 great grandchildren: Mattie, Meghan, Mollie, Laney, Abram, Eli, Josiah, Avery, Emsley and Paxton.

Viewing will be Saturday August 25th at 9:30 followed by a service at 11:30. Both will be held at the Christiansburg Church of the Brethren and conducted by the family. Interment will follow in Sunset Cemetery. The family would like to recognize the service and care provided by Good Samaritan Hospice and their staff.